Pass a Virtualization exam, get a FREE TechNet subscription

If you pass any Virtualization exam between March 1, 2011 and June 30, 2011 you will receive a complimentary TechNet Subscription. First 1,000 participants only! Registration is required. T&C apply.

Do you have the latest Microsoft software to test and evaluate?

You do!  It’s already included in your Microsoft Partner Network benefits!

This is a reminder that your organization has access to the best collection of Microsoft evaluation software just by being a Microsoft Gold or Silver Competency Partner or Microsoft Action Pack Solution Provider subscriber!

Deepen your understanding of Microsoft products and technologies:

I Thought We Weren’t Supposed to Change Settings in the Registry?

Following is an excerpt taken from a Microsoft Technet article written by the Scripting Guys. It’s about the Windows Registry and I found it rather amusing:

As you probably know, Microsoft has a sort of love-hate relationship with the registry. The registry is the configuration database for Windows and Windows applications, and many options can only be set by manually changing a value in the registry. For example, if you’ve ever read a Microsoft Knowledge Base article, you’ve likely seen a sentence similar to this:

To correct this problem, change the following value in the registry.

Now that’s fine, except that this sentence is invariably followed by a disclaimer similar to this one:

Warning: Don’t ever change a value in the registry. Ever. We know we just told you to do that, but would you jump off a cliff if we told you to? Don’t ever change a value in the registry. Don’t even say the word registry. We know a guy once who said the word registry, and three days later he was hit by a bus. True story. As a matter of fact, you shouldn’t even have a registry on your computer. If you suspect that you do have a registry on your computer, call us and a trained professional will be dispatched to your office to remove the registry immediately. If you accidentally touch the registry, wash your hands with soap and water and call a doctor. Do not swallow the registry or get it in your eyes!

Now, to be honest, some of those fears are a bit exaggerated, and the disclaimer is there largely for legal reasons (remember, this is the day and age when you can order hot coffee in a restaurant and then sue the restaurant when the coffee they give you turns out to be, well, hot). If you do it correctly, changing the registry is perfectly harmless. At the same time, however, it’s true that there are certain values in the registry that should never be changed. In fact, changing them can pretty much wipe your computer out, once and for all. It’s like working on the bomb squad: if you snip the right wire, the bomb is defused and everything is fine. But if you snip the wrong one—Boom! You just created Microsoft Bob!

Um, not that we’re saying Microsoft Bob was a bomb or anything.

It’s that time of the year again – the MSDN and TechNet roadshows are coming soon to your city!

You will also be among the first to see us unveil the new Unified Communications technologies from Microsoft – a solution that will revolutionize the way people communicate and collaborate in the workplace.

If you’re an IT Professional or a Developer looking to gain insight and an edge over others, then you’ve got no excuse to miss out on this event! You may even walk away as the lucky winner of the new X-box 360 Elite!

Microsoft has announced that the event will be held on November 19th at The Sheraton in Bahrain, Dec 4th & 5th at Habtoor Grand Hotel, Dubai and the 9th of December at the Intercontinental Doha. 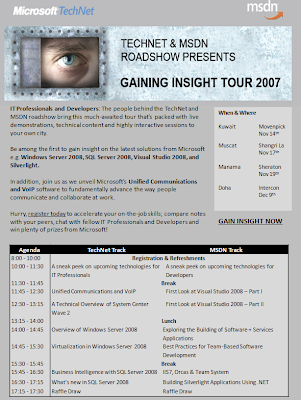 Article published on Microsoft Knowledge Base

http://support.microsoft.com/kb/555937
“How to export members of an Exchange distribution group to a text file”

My first contribution to the Microsoft Knowledge Base. An article with my name on it. I look at it with the same ecstacy that an eight year old child would have had when he sees his own name in print. For those of you in the Middle East – it’s the Microsoft TechNet Guru contest. You answer 10 question on the recently released Microsoft products. Psst.. no sweat — its the same set of questions for everybody and it’s easy as long as you know how to use this cool new website called Google – you’ll have all the answers!

But I guess that’s what they made it for, so that people dig for answers to win prizes — and in the process, learn a thing or two about Microsoft’s newly released software.

Here’s the link to participate: www.microsoft.com/gulf/techguru
Categories:  'Uncategorized'
Tags:  'contest, techguru, technet'
There  are no comments.