Q: I want to deploy Windows 10 within Hyper-V VMs. What Hyper-V host is required?

Here are a couple examples of supported configurations:

Since there’s so much interest in Windows 10, here are further details:

Q: I want to deploy Windows Server 2016 within Hyper-V VMs. What Hyper-V host is required?

Categories:  'Uncategorized'
Tags:  'support, Windows Server 2003'
There  are no comments.

My first post, thanks Shijaz for helping me out with setting this up. Thought where else to start than to write about the team wherein I work in Microsoft, that is the Microsoft Premier Services.

With Premier Support, you gain a dedicated resource who is your eyes, ears and voice within Microsoft; the Technical Account Manager (TAM). Working with you, your TAM will:

Predominantly the focus of Microsoft Premier Services is to identify and address potential problems before they occur, thus reducing the risk of downtime and interruption to your business.  This in turn benefits you with increased system availability and uptime that keeps you end users productive and make IT a strategic asset to your business than a cost center or liability.

The result? Lower risk to your IT infrastructure, higher productivity and maximum benefits from your existing IT investments and better alignment of IT to business capabilities.

If you or your customers are running Windows Vista RTM version (without any service pack), please note that support for it has ended yesterday, April 13, 2010.

To continue receiving support for Windows Vista, you must install Service Pack 1 or Service Pack2, which is available as a free download from the Microsoft Download Center.

Follow this link, for information on how to obtain the latest service pack.

In case you didn’t notice, Microsoft will end support for Windows 2000 (Client and Server) and Windows XP SP2 on July 13, 2010. Customers will no longer be able to call Microsoft for support or receive free security updates from Microsoft unless they move to a supported version of the operating system.

Update (18-Jan-2010): Windows XP SP3 is going into extended support till April 2014 meaning that you can get hotfixes if you enter into a (paid) Extended Hotfix Support agreement, which is not included by default in a Premier Support agreement.

This post (as with all other posts on microsoftnow.com), is provided “as is” and confers no rights.

Which Microsoft applications can I virtualize?

For a list of Microsoft servers and products that are tested and supported in virtualized environments, see the Microsoft KB article 957006.

Be sure to bookmark this article, as the page is regularly revised as new products are supported. As of writing this post, the page is at Revision 10.0.

The Future of Windows XP

After having tirelessly served the world for more than eight years, Windows XP is fast being replaced by its younger brother, Windows Vista.

Most of us are curious to know what exactly is the future of Windows XP. Most of us have seen it in retail stores, and even seen it being shipped with new computers even after the launch of Windows Vista.

So what does the future hold for Windows XP? What if you can’t run Vista, and you really must use Windows XP? How long can you use Windows XP? To get an answer to all these questions, and much more – read what Microsoft has to say: Windows XP: The facts about the future.

Maybe this is a good time for organizations to seriously start thinking about upgrading to Exchange Server 2007 and make use of the new, advanced features.

Microsoft will pull the plug on Exchange Server 2003 support in April 2009.

Unless another service pack is released for Exchange Server 2003 (which is unlikely), the mainstream support for the product will end on 14th April 2009.

If you’re still running Exchange Server 2003, its time to start thinking of upgrading to Exchange Server 2007. One year from today, you will not receive support from Microsoft if you face problems on your Exchange 2003 installation, unless you purchase the ‘extended support’ option, which is available till August 2014.

How to bulk edit an Active Directory attribute

Everybody knows that if you want to manually edit the value for an attribute in Active Directory, you ought to be using ADSIEDIT.

But what if you just realized that you have to modify a particular attribute for a large number of Active Directory users, if not all users? Would this mean opening up each user object in ADSIEDIT and modifying the required attribute?

Thankfully, there is the ADModify tool from Microsoft PSS that lets you bulk-edit Active directory. You simply set the filter on what users should be affected, and then specify the attribute that needs to be changed and the value to which it should be changed. You can even make the values to 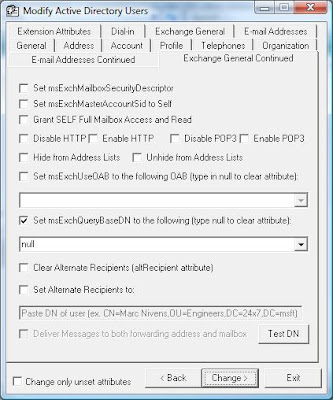 A word of caution here – Bulk edits can be really, really painful if you do it wrong. You can seriously mess up your Active Directory if you’re not careful!