Capture your whiteboard doodles on OneNote

From the product blog:

Office Lens is an app that’s like having a scanner in your pocket. You can use it to take pictures of things like business cards, restaurant menus, notes on whiteboards or blackboards — anything you want to keep on hand. But unlike loose sticky notes, business cards or sketches on lunch napkins, you won’t lose track of your ideas when you capture them with Office Lens. Even things like children’s artwork is fair game. Snap a picture of that one-of-a-kind card your child made and it’ll be at your fingertips whenever you’d like to see it.

Office Lens trims, enhances and makes pictures readable. Weird angles are straightened, shadows are cleaned up and the images are automatically synced to OneNote, so you can get to them on all your devices.

When your picture includes printed text, such as a poster or business card, OneNote on a PC can recognize the text with optical character recognition (OCR) so you can search for words in the image — and you can edit the text, or copy and paste it into apps like email and documents.

Office Lens has three modes, or settings, that help make your captures look their best:

Categories:  'Uncategorized'
Tags:  'office, OneNote'
There  are no comments.

Office 365 brings you familiar Microsoft Office collaboration and productivity tools delivered through the cloud. Everyone can work together easily with anywhere access to email, web conferencing, documents, and calendars. It includes business-class security and is backed by Microsoft. Whether you are a small business or multinational enterprise, Office 365 offers plans designed to fit your organization’s unique needs.

User productivity you can count on:

Office 365 takes the worry out of IT:

Enterprise Search in Office 2010 has been improved, with Microsoft’s recent acquisition of Fast Search & Transfer.

This information was revealed during the TechEd conference.

Office 2007 SP2 was released just a few days ago. Some of the significant improvements are:

You can download Office 2007 SP2 from the Microsoft Download Center or get it installed via Windows Update.

The current version of Microsoft Office is Office 2007, also known as ‘Office 12’, based on the version number. That would make it more likely that the next version of Office should be code-named Office 13.

But it is not so. The next version of Office has been code-named ‘Office 14’ instead. Microsoft has skipped version 13, simply because 13 is an ‘unlucky number’!

"…but that’s is an unlucky number so we’re going to skip Office 13 and call the next one Office 14" says Jensen Harris, Group Program Manager for Microsoft’s Office User Experience Team and the man behind the "ribbon" interface of Office 2007, which has attracted mixed feelings from users.

Some may argue that the world’s largest software company shouldn’t be worried about seemingly ridiculous superstitions. However, if one looks at the bigger picture, there may be customers who believe in these things, and may show reluctance at the very mention of upgrading to something that’s called Office 13!

Some of the new features that users can expect in Office 14 (based on publicly available information):

Categories:  'Uncategorized'
Tags:  'office'
There  are no comments.

Software + Services: MS Office apps on web browsers. What next?

This initiative is consistent with Microsoft’s "Software + Services" vision. Software plus Services is Microsoft’s take on the Software-as-a-Service (SaaS) market.

With Microsoft services like Exchange Online, SharePoint Online, and CRM 4.0, organizations big and small now have more choices in how they access and manage enterprise-class software – from entirely Web-based, to entirely on-premise solutions, and anywhere in between.

Having a variety of solutions to choose from gives customers the mobility and flexibility they need to meet constantly evolving business needs. To meet this demand, Microsoft is heading towards a hybrid strategy of "Software plus Services", the goal of which is to empower customers and partners with richer applications, more choices, and greater opportunity through a combination of on-premise software, partner-hosted software, and Microsoft-hosted software.

The web-based Office applications will be light-weight versions of Word, Excel, Powerpoint and OneNote. These apps can be accessed anywhere using a web browser from a PC or via a downloadable application on a mobile phone.

This is more a Microsoft Word tip rather than an Active Directory tip. In essence, it shows one of the many methods to compare values of all attributes of two different objects in Active Directory, or of the same object in a "before-after" comparison scenario – to track changes.

In this example, we will try to do a before-after analysis of a single user object to track changes that have happened to the attributes of the same user object.

First, I dump the LDF file for the user that I want to track changes for, before I make the changes using the LDIFDE tool.

Then, I make the changes to the attributes. In this case, I am moving the user’s mailbox from an Exchange 2003 server to an Exchange 2007 mailbox server.

Once again, I dump the LDF for the same user after I’ve done the operation.

Now I have two LDF files, which I want to compare. Microsoft Word has a pretty cool compare feature that shows you what exactly has changed in red. Also, you get to see both the files in two small windows and the changes in a separate window, and they all scroll together!

Simply open (or paste) the two files in Microsoft Word as separate documents. Then, open up the Review toolbar tab, and choose the Compare option. How to subscribe to an RSS feed in Outlook 2007

If you have installed Microsoft Office Outlook 2007, you’ve probably seen the (mysterious-looking) ‘RSS Feeds’ item in your mailbox tree. Let’s see how to put this to good use. 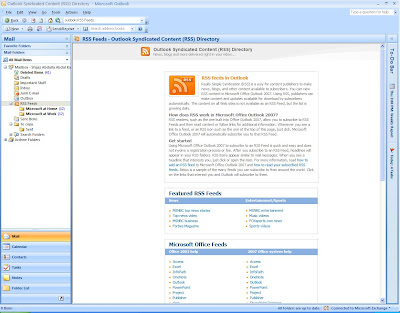 I’m going to show you how you can subscribe to my blog’s RSS feed using Outlook 2007. 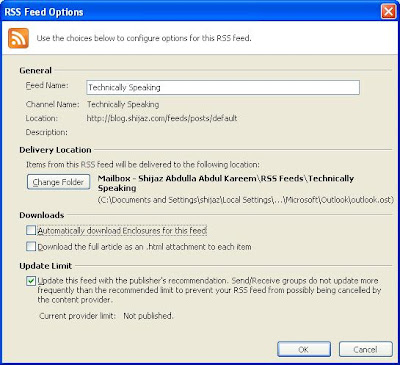 “How to make a PDF” for Dummies

How do you convert a Word document or Excel sheet to PDF?

“Easy” I hear you say. “Just install that Adobe thingy and you will get the option in Word.”

Not necessarily. With Office 2007, just download and install the Microsoft “Save As PDF” plug-in (for free) and then point to Save As… PDF or XPS. 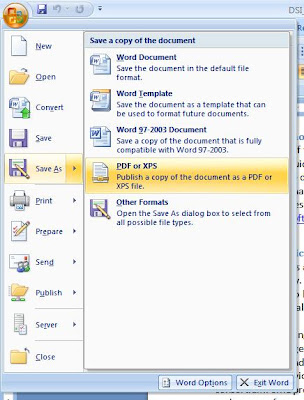