It’s a tremendous pleasure to announce Microsoft has two industry awards from CRN. The awards are:

The final Tech Innovator award was in the virtualization category and also happened to be the CRN Test Center’s Editor’s Choice. Trailing in the virtualization market almost since there was a virtualization market, this company has worked hard for years to build a system with capabilities that are almost beyond belief. For example, imagine migrating an established LAN and its users from behind a company’s firewall to the cloud using drag-and-drop with virtually no user downtime. With its data-center abstraction layer, companies can deploy and manage virtualized applications, full desktops, servers and even orchestrated Web services using a GUI, a command prompt or natural-language scripting. And as the company’s competitors are learning, simple, core-based pricing is the method most preferred by resellers and the industry. So we congratulate this year’s Tech Innovator award winner for virtualization and the 2012 Editor’s Choice award. Both go to Microsoft and its Windows Server 2012. Accepting for Microsoft was Jeff Woolsey, principle program manager lead, Windows Server.

At the Open Door event in Qatar, Microsoft recognized some of our top partners and customers and presented them with awards.

The nominees and winners in each category are listed below.

Congratulations to all the winners and thank you for all that you do!

Best company to partner with in the world

I am very excited to announce that Microsoft was just named the 2011 #1 Best Company to Partner with by CRN and the Partner research survey they ran. This is exciting news, particularly as the finding was purely based on Partner-driven responses.

You can read more about it here: http://www.crn.com/slide-shows/channel-programs/231902705/2011-best-companies-to-partner-with.htm;jsessionid=J1RWHOHu48RLsVv6nf4dQA**.ecappj03?pgno=26

I want to thank our partners for valuing our partnership and wish for more success moving forward.

Best place to Work in the world

A few weeks ago, Microsoft was also listed as 2011 #1 Best Place to work, ranked by Great Place to Work, a research and consulting firm that has collaborated in the past with Fortune magazine to produce a "Best Companies to Work for" series of publications.

“Community Recognition Award” is an award rewarded to those who are contributing to Microsoft development community within the region as a speaker, trainer and mentor.

Wajahat received this award from Microsoft Pakistan on his continues service to Microsoft development communities. He is also a Judge for Microsoft Image Cup Pakistan since 2007. He was also Microsoft Official trainer for SharePoint 2010 Ignite and a founder member of INETA Pakistan committee.

He was the SharePoint Speaker for Microsoft Open Door Pakistan 2010.

Wajahat is currently working as a Service Manager at QDS. He is an experienced SharePoint consultant and through his consulting and training, he helps clients in Middle East, Pakistan & East African region. He has closely worked with Microsoft consulting services as a contingent consultant. He was also Microsoft MVP for 3 consecutive years. He has around 10 years of IT industry experience.

Microsoft made it to the list of the 2011 World’s Most Ethical Companies ranking by Ethisphere in March 2011.

The ranking covered companies from various industries. In the computer software industry only Microsoft, Adobe, Salesforce, Symantec and Teradata made it to the list.

Ethical. And Social too.

Last year, Microsoft also topped the list of the world’s “most social” companies, thanks to the hundreds of Microsoft employees that reach out to the public through blogs, Twitter, Facebook and other social media.

Three in a row: MVP again!

I am pleased to inform the readers of this blog that I have been awarded the Microsoft Most Valuable Professional Award for the third consecutive year. The MVP Award is given to exceptional technical community leaders who actively share their high quality, real world expertise with others.

I was first awarded MVP in October 2006 in the ISA Server category. Currently this is known as the ForeFront category.

I thank the Almighty for giving me strength, time and energy to serve the IT community. Let me also thank all of my readers out there for their constant support and words of encouragement. I look forward to continue being a part of the Global MVP community that serves, influences and eases the lives of many IT professionals everyday.

It says "We recognize and value you exceptional contributions and commitment to the technical communities worldwide."

I was delighted when I received an email from my MVP lead, Amr El Garhy, mentioning to me that I have been selected for the MVP Award 2008 again this year. This will be my second consecutive year of receiving the prestigious MVP Award.

Congratulations! We are pleased to present you with the 2008 Microsoft® MVP Award! The MVP Award is our way of saying thank you for promoting the spirit of community and enhancing people’s lives and the industry’s success every day. Your extraordinary efforts in Windows Server System – ISA Server technical communities during the past year are greatly appreciated.
…
On behalf of everyone at Microsoft, thank you for your ongoing contributions to technical communities.

I am so happy and proud of my accomplishment, and I thank God for giving me the strength to do what I do and to do it better. This wouldn’t have been possible without the recognition I receive from my online and offline community, and the encouragement that I receive from my parents, my friends, my MVP lead, and readers like you. Thank you.

The ‘Most Valuable Professional’ Award

I was thrilled when my MVP Lead Amr Al Garhy informed me that I was selected for the MVP Award in the October 2006 cycle. That would make me the first MVP in Bahrain. Today, Oct 7, I received my MVP Award Kit via DHL. 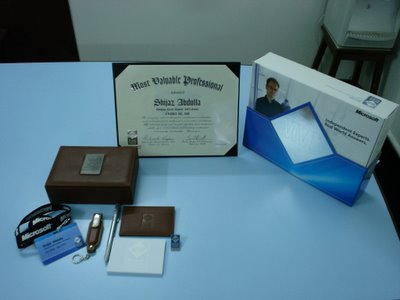 Here’s what’s in the package:

I’m proud of my achievement and look forward to make further contributions to the technology community.

Categories:  'Uncategorized'
Tags:  'award, mvp'
There  are no comments.