I’ve managed to pull up a two node Exchange Server 2007 SP1 Single Copy Cluster (SCC) running on Windows Server 2008 failover cluster. Moved in a few mailboxes (mostly belonging to my colleagues, who have so graciously consented to being guinea pigs.. um err.. volunteers for this project). 🙂 So far so good, there weren’t any major surprises.

Until when I started thinking about Backup.

Here’s the shocker for those of you who don’t know: Windows Server Backup (the all-new ‘NTBACKUP’ that ships with Windows Server 2008) does not support backing up Exchange Server 2007 mailbox stores! 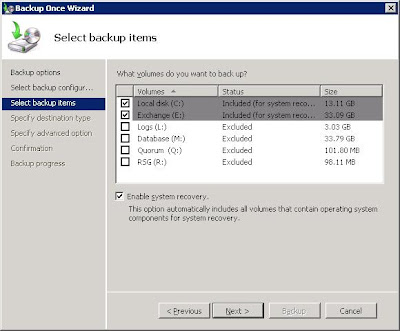 You can use System Center Data Protection Manager 2007! I am currently evaluating this possibility, and will post my experiences on this blog.