How to understand an Exchange Server 2007 NDR

Here’s one for users and IT support personnel who sometimes have problems understanding what exactly an email non-delivery report (NDR) is trying to convey. Messaging experts, please excuse.

So, how easy is it to understand an NDR? 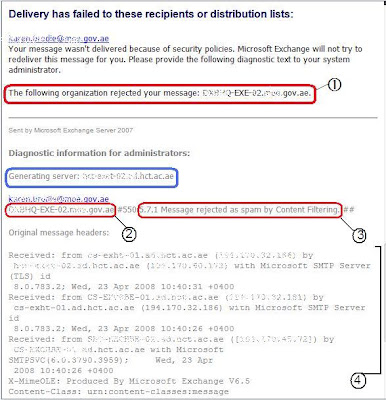 Here are some tips:

The more users you train on how to read NDRs the lesser helpdesk calls you will get. I’ve seen that sometimes very simple NDRs like the following get escalated all the way to the email administrator as an “email problem”:

Your message did not reach some or all of the intended recipients.

Subject: RE: Acquisition of Yahoo Sent: 4/15/2008 11:09 PM
The following recipient(s) could not be reached:
shijaz@2hotmail.com on 4/15/2008 11:09 PM The e-mail account does not exist at the organization this message was sent to. Check the e-mail address, or contact the recipient directly to find out the correct address.

The solution? Teach the user how to type an email address correctly :).