So, you set up your VOIP gateway and have figured out how to install the UM server. Let’s have a closer look on how stuff works.

Scenario 1: Somebody calls the extension (No. 101) on your desk while you’re at your desk

The Central Office (your telco) sends the call to your organization’s PBX. The PBX forwards the call to your extension no. 101 based on the configuration/coverage plan that is already configured on it. You answer the call. End of story.

Scenario 2: Somebody calls the extension (No. 101) on your desk while you’re out of office

The Central Office (your telco) sends the call to your organization’s PBX. The PBX forwards the call to your extension no. 101 based on the configuration/coverage plan that is already configured on it. Of course, nobody is there to answer the call, so the call is returned to the PBX. 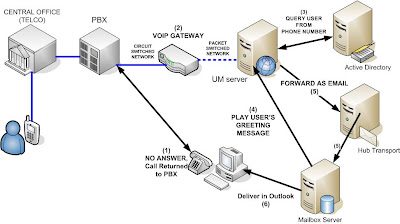 Based on the hunt group that you have configured on the PBX, it can be made to forward the unanswered call to the Unified Messaging server. The PBX (if not IP enabled) will have the VOIP gateway behind it, which will convert the circuit switched network to a packet switched network that the UM server can understand. A non-IP PBX cannot talk directly to the UM server.

The VOIP gateway uses the SIP (Session Initiation Protocol) to establish a session with the Unified Messaging server over a packet-based network. Once the session is established by the SIP protocol, transmission of voice to the UM server is done by the RTP protocol (Realtime Transport Protocol).

The UM server queries the Active Directory to find out who’s extension is ‘101’. This information is found by querying the AD for the user account that has Office telephone number attribute set to ‘101’. Once it looks up the user, the UM server connects to the mailbox server (using MAPI) to fetch your prerecorded greeting message: “Hi, this is Shijaz and I think I’m not at my desk now, could you please leave a message?” 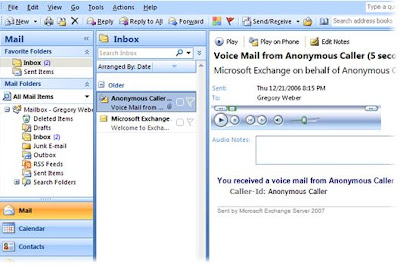 You can check your voicemail in your OWA as well 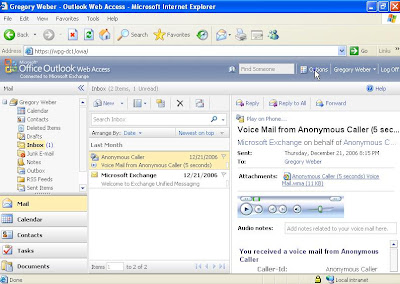 And that’s how it works!