Change the World… Or Go Home!

GapingVoid.com is a website maintained by Hugh MacLeod, whose passion is drawing cartoons on the back of business cards.
Hugh claims he created the Blue Monster as a conversation-starter. Though there is something demonic about the monster, it shows aggressiveness in becoming a world leader, an epicenter of change that Microsoft should aspire to become. 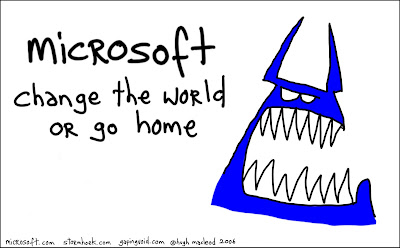 The headline on the cartoon has many meanings:
In Hugh’s own words:

the blue monster: “for too long, microsoft has allowed other people tell their story on their behalf- the media, their competition and their detractors, especially- instead of doing a better job of it themselves.

We firmly believe that Microsoft must start articulating their story better- what they do, why they do it, and why it matters- if they’re to remain happy and prosperous long-term.

Hugh has licensed the cartoon under Creative Commons, which means you can do anything with it as long as you don’t make money with it. I think its a really cool wallpaper and will look great on a T-shirt!