Today I received a mail, supposedly from Microsoft, regarding a “security vulnerability”: 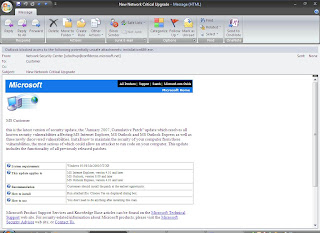 Click on the image to zoom
It had an EXE attachment “installation689.exe”. The message was written in the kind of language Microsoft uses to communicate with its customers – clear, courteous and concise explaining clearly what the update is for, etc. The first thing a novice (or even an intermediate) user would do, is to download the attachment and install the patch.
It even had the classic Microsoft footer: 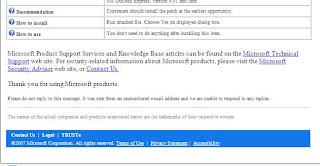 Now, there are a few things that are revealed upon closer examination:

What a clever way to outwit the unsuspecting user! So those of you out there, beware of stuff that comes in your e-mail! Think twice before you run an EXE attachment.

From my experience, 9 out of 10 EXE attachments are viruses. Sometimes they appear to come from people you know, because they are actually sent by malicious programs that have already infected their machines.